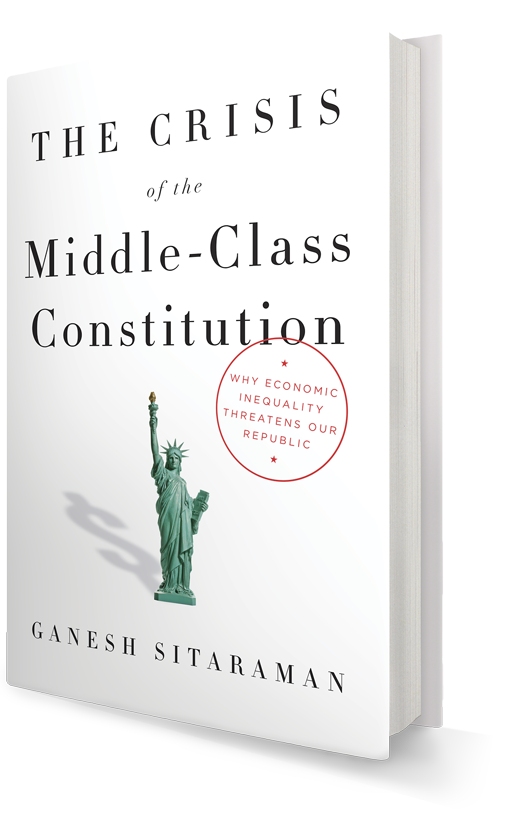 The Crisis of the Middle-Class Constitution

In this original, provocative contribution to the debate over economic inequality, Ganesh Sitaraman argues that a strong and sizable middle class is a prerequisite for America’s constitutional system.

For most of Western history, Sitaraman argues, constitutional thinkers assumed economic inequality was inevitable and inescapable—and they designed governments to prevent class divisions from spilling over into class warfare. The American Constitution is different. Compared to Europe and the ancient world, America was a society of almost unprecedented economic equality, and the founding generation saw this equality as essential for the preservation of America’s republic. Over the next two centuries, generations of Americans fought to sustain the economic preconditions for our constitutional system. But today, with economic and political inequality on the rise, Sitaraman says Americans face a choice: Will we accept rising economic inequality and risk oligarchy or will we rebuild the middle class and reclaim our republic?

The Crisis of the Middle-Class Constitution is a tour de force of history, philosophy, law, and politics. It makes a compelling case that inequality is more than just a moral or economic problem; it threatens the very core of our constitutional system.

“What Piketty was to economics, this book is to our constitutional tradition. Sitaraman uncovers the lost essence to our constitutional past, and renders it as important today as it ever was. His beautifully written and powerfully argued book will change the discourse of constitutionalism—for the better.”
—Lawrence Lessig, author of Republic, Lost, and Furman Professor of Law and Leadership, Harvard Law School

“A pathbreaking effort to rethink the past, present, and future of American constitutional development.”
—Bruce Ackerman, Sterling Professor of Law and Political Science, Yale University

“Ganesh Sitaraman has reached broadly into history, economics, and politics to provoke concern about the risks that wealth inequality poses to the stability of our constitutional system. This is a brilliantly inventive argument, especially sobering in light of the populism of the right and the left during the last presidential election.”
—David K. Shipler, author of The Working Poor: Invisible in America

“Can American democracy survive the decline of the American middle class? With The Crisis of the Middle-Class Constitution, Ganesh Sitaraman has provided a strikingly original, provocative and timely intervention in this urgent debate.”
—Michael Lind, author of Land of Promise: An Economic History of the United States

“American democracy cannot stand too much economic inequality. In fact, American democracy is built on a robust idea of economic fairness among citizens. In this new Gilded Age, these principles have been easy to neglect. In his timely and important book, Ganesh Sitaraman makes a strong case that economic fairness is a constitutional principle, and that if we give up on it, we will have given up on our democracy altogether. In making this argument, he gives readers a powerful and useful narration of the long American struggle for genuine self-government. He also pays close and valuable attention to the concrete reforms that can move us closer to real democracy.”
—Jedediah Purdy, author of After Nature: A Politics for the Anthropocene and Everett Professor of Law, Duke University School of Law